The conversion factor from miles to yards is 1760, which means that 1 mile is equal to 1760 yards:

To convert 734 miles into yards we have to multiply 734 by the conversion factor in order to get the length amount from miles to yards. We can also form a simple proportion to calculate the result:

Solve the above proportion to obtain the length L in yards: 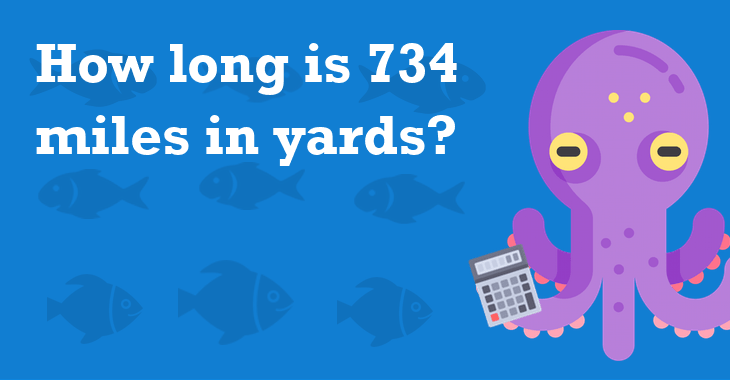 For practical purposes we can round our final result to an approximate numerical value. We can say that seven hundred thirty-four miles is approximately one million two hundred ninety-one thousand eight hundred forty yards:

An alternative is also that one yard is approximately zero times seven hundred thirty-four miles.

For quick reference purposes, below is the conversion table you can use to convert from miles to yards

The units involved in this conversion are miles and yards. This is how they are defined:

A mile is a most popular measurement unit of length, equal to most commonly 5,280 feet (1,760 yards, or about 1,609 meters). The mile of 5,280 feet is called land mile or the statute mile to distinguish it from the nautical mile (1,852 meters, about 6,076.1 feet). Use of the mile as a unit of measurement is now largely confined to the United Kingdom, the United States, and Canada.

A yard (symbol: yd) is a basic unit of length which is commonly used in United States customary units, Imperial units and the former English units. It is equal to 3 feet or 36 inches, defined as 91.44 centimeters

How long is 734 miles in other length units?